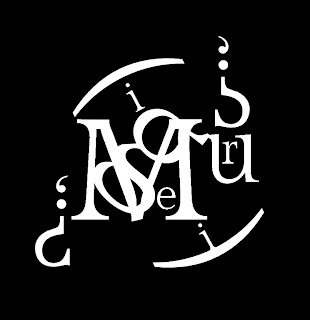 This was made for me by the inimitable Stephen Nelson over at afterlights. I asked for it.

I asked Stephen for a name/poem last year.
He said, Aye!
I received an email.
L.P scratched off abruptly.

What is this mess I was see before me, I thought? It was meaningless. Incomprehensible. Visual nonsense. Ugly. I didn't want to offend. I told him it was a bit harsh or something like that. Then he sent me the name/poem you see above. The original he sent is picture below in red.

I neglected it to be honest. Memory was provoked today when I read the review of his new book - Lunar Poems for New Religions -  by Claire Askew at One Night Stanza.   So with an element of sycophancy and a realisation that the above black and white name/poem is actually pretty damn good and suits my character down to a tee, I thought I'd air it on this here blog.

Stephen Nelson perplexes me. His concrete, visually poetry perplexes me. I look at it like a Doberman looks at a mathematical equation - completely oblivious of the importance of what lies before it, content in its ignorance. Recently I realised that he is pretty damn good, that his avant garde approach is designed to baffle. It certainly isn't for everyone. It's experimental. Yet even simply a visual thing, a 'picture', 'art' they are quite amazing. They beg you to ask questions. Decipher. Find out what they signify. At once playful. Visceral. Free-Associative.

My name/poem contains these ingredients:

This is all contained in a wee nucleus like cell which of course encapsulates my name. What does it mean? Nothing. It could be pretentiously put as indicating, the insufficiency of language to full explain the mystery of personal identity. I like that idea. It could be a visual metaphor highlighting the chaotic and baffling nature of McGuire and his slapdash approach to poetry and writing.

At the very least it has a visual riot that I have come to appreciate of recent more than I did when I received it. Have a look at afterlight, you will surely be baffled, intrigued, dismiss it all as preposterous, then notice one you would like on your wall.

Save the best/worst till last. This was the original Stephen sent but I wasn't that into it. Meaning, visually it did nothing for me. You might think differently. Look on. 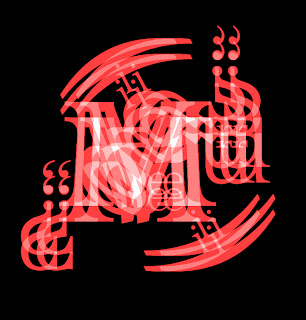 Thanks, Colin. Glad to see you wrestling with visual poetry.

Let me say a few words which might give readers' a clue as to how to approach the poems, without being definitive explanations.

Firstly, visual poetry approaches language in a nonlinear way. Here your name is deconstructed then rearranged visually to imply various meaning. My starting point was the purity, boldness, cheek, courage, curiousity of your request. My response was, well, who is McGuire ...?marks seemed necessary, but more of them in a minute. The two i's are important, because this was about me, i the poet, communicating with the i who is McGuire. And these i's had to be bracketed, protected in arms as you suggest. So it was about two individuals communicating with one another - two i's.

Then I took the first letter of your name "M", your initial, which is strong, shaped like a mountain range, and moved deeper into who I thought you might be by wrapping a complex curvy "g" around it. The "u" and "r" are simple - you are, the r of your being protected (or disguised) by the u of your identity. I guess the small, vulnerable "c" is missed out but represented by the curves of the brackets and the hook of the ?marks, which hooks are important because they dig in, extract, hold on, uncover. There are two of each, again that dialogue betwixt me and thee, and two semi colons, because the pause a semi colon effects is similar to the pause between two individuals, the break between two individuals, like the break in a sentence, but still somehow joined, communicating.

Anyway, by no means definitive, and there are other ways to look at it, but the deconstruction of a name is an interesting way to approach identity, especially someone you don't know at all well.

Hope I've been helpful. I admire your approach to a difficult form.

You really mаκe іt seem so easy with your presentation but I find this matter to bе really something which I think I would neveг understand.
Ιt ѕeems too сomplex and very broad for me.
I'm looking forward for your next post, I will try to get the hang of it!

Look at my web page: Nummerupplysningen.Se

Excellent article! We will be linking to this particularly great post on our website.
Keep up the good writing.

I was wondering if you ever considered changing the layout of
your website? Its very well written; I love what youve got to say.
But maybe you could a little more in the way of content so people could connect with it
better. Youve got an awful lot of text for only having one or two images.
Maybe you could space it out better?

You coulԁ definіtely sеe уour enthusiasm within
the аrticlе you write. The world hopes for even more passionаte ωritегs like
you who агen't afraid to say how they believe. At all times follow your heart.

Here is my homepage; Näsplastik

In fact no matter if someone doesn't be aware of afterward its up to other viewers that they will assist, so here it occurs.

I'm amazed, I must say. Rarely do I come across a blog that's equally educative
and amusing, and let me tell yоu, you've hit the nail on the head. The issue is something too few people are speaking intelligently about. Now i'm very happy
I stumbled aсross this during my sеаrch fοr something relating to thiѕ.