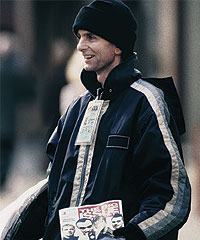 Byres Road:
Outside Hillhead underground,
I'm standing in the street
handing out free newspapers
that no one has an interest in
but I'm getting paid for it
so I'm not overly concerned.

After a bit of standing and handing
Along walks a Big Issue seller he takes up stand
not too far away from me, he's with his boss
the guy who makes sure
all the vendors are in their stand.

They notice me handing out my rag
and i think cringe: Aw no, no!
They are eyeing me up thinking
I am a fool for standing here
near the Big Issue sellers spot
handing out a cheap paper
while he is tryong to sell a paper,
at the very least with a purpose.

But both come over say hello...
the boss pulls out two apples from his bag
and hands them to me in a friendly manner.
I put one in my left pocket and one in my right
and the boss says 'it's cold oot here the day'
I reply 'Aye, it's, Baltic. Thanks for the apple's.'
and then the Big Issue seller says
'Don't worry son, you're no standin in ma spot'

His boss moves off and
we stand apart from each other.
I go over and buy a copy of the Issue
then I go back and stand in my space
and continue to hand out more papers
to those who want freepapers.

After six hours the cold gets to you,
hands and feet numb the people pass
and the rain urinates down relentless.
And with that I decide to get the bus home
So I say goodbye to the big issue seller
he says: 'i'll see you some other time Big Man'

I get on the bus soaked and freezing
the bus is cold as well and after a bit
the windows start to steam up with
condensation from all people giving off body heat
talking and waiting to go home for their dinner.
Just like I was.
Posted by McGuire at 6:23 am 2 comments: