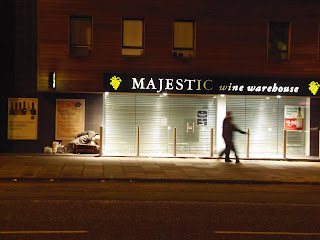 I've been living in Edinburgh on and off for about two years now. I live near Leith Walk. I walk up and down it regularly. There is this guy who always sits around the street. Wiry wild grey hair, bleary red eyed, of African descent, wears dirty blue jeans, blankets tucked and wrapped around his waist. Face haggard and rich with lines and wear and ruin. His hands are tought, skin cracked clay and caked in grime or dirt. He sits in bus shelters, smoking cigarette doubts. I seen a man once hand him bananas.

Every city has these lone wild card eccentrics.  Lone ineffable homeless characters. Often an oblivious feature the street. This guy sleeps outside Majestic Wine everynight on a grate with some cardboard for a matress and a tatty sleeping bag to keep warm. He sleeps awkwardly on his side. I've passed by him while he sleeps. I always take a moment to look at him. What crazy world has he got inside of himself? What has life unleashed upon him? Maybe he escaped something far worse. Maybe he has gone a bit mad with indifference. This man with wild grey hair and a red eyes, who is he? His atmosphere is not hostile. He feels amiable, pleasant, yet his oddness is undeniable. He walks up and down Leith Walk. I've never seen him anywhere else. He has sat ouside the 'Sea Breeze' cafe (greasy spoon), and they don't move him along. He sits with a blanket over his shoulders. Sometimes fast asleep. Other times just waiting. Waiting for what. Waiting for the mercy of the sun perhaps. Afterall, he survived winter sleeping out here. Least I think he did unless he has somewhere else to go. I've seen him sleeping out there in ice cold conditions. He must have some strength. Some immunity. 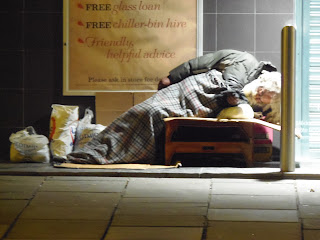 He carries bags filled with other platic bags. Not sure what's inside. More polymers, maybe blankets. People know him, I'm sure. People stop to talk. I wanted to talk to him. I wanted to find out more. Somehow I found out his name is Arthur but I can't remember who told me. Did I make it up? I don't think so. Someone told me. I heard it. Somewhere. Some rumour. But that's how I see him - Arthur. I wanted to talk to him. Find out his story. Give him a cup of tea for his time. Instead, I have his name, and some photos I took one evening walking down. I never asked permission. I just wanted to capture him. Get something down. 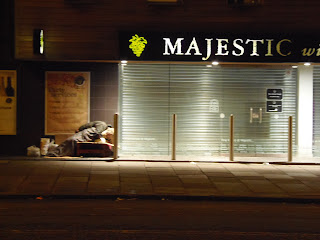 I've walked passed him so many times and felt the urge to talk. He probably gets it all the time though. Strangers trying to be nice. Trying to be angel like. Thinking they will be the first person to really give him the time of day. And one evening he was walked towards me, our eyes met as eyes do, and we both said 'Hello' as we passed by.

Arthur has his own style. His own atmosphere, his wild wiry grey hair, his short limping gait, his just sitting watching time pass, people migrating to work and back. I might yet talk to him. Keep a respectful distance. Maybe this is enough, to acknowledge him here with some photographs, and keep that mystery which anonymity brings. I don't want to invade his space. He intrigues. That is enough. Seeking too much can destory a thing. So, there he is, Arthur. 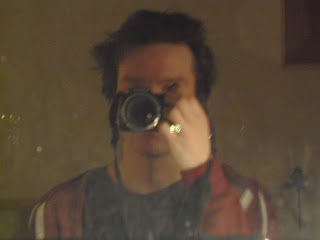 Do you think I wrestle merely with goldfish
on an Icecream Sunday of the soul,
enduring the outrageous slings and arrows
of a pantomine dame during the dark night
of the lost remote control?

Posted by McGuire at 9:01 am No comments: