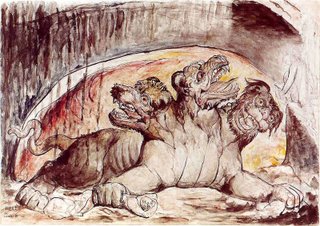 It is Friday. I shall be going out for some drinks tonight.
I shall drink with due care and attention. Like a policeman.

Ah, but all round the world is a crazed Dog!
A mad Cerberus frenzied with rabies...

It appears everyone is sniffing their own private parts.
Licking their wounds...following their Master...Heel Boy!

The bombs drop and fall and burst
wild placentas from some grand abortion...
how vivid and bombastic an image, how melodramatic!

As the soldiers cry in their late night beds.
As the widows weep and weep and weep to no-one.
As the many judge the few, weak jump, strong arm.
As the machine guns melt, bullets retreat, missions fail.
As the bombs burst pour say nothing and begin again.
As the casualties drop like condemned buildings.

It will continue like a recurring guilt
and we are useless to stop it.

I shall go now and drink and sing and dance ridiculous
as the poems write themselves as all wars are one war
as the Sun and the Moon ask no questions.