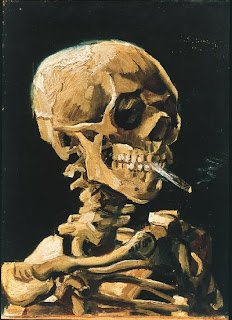 Too many ideas/images in this for my tastes. I would pick the best and ditch the rest.

One or two stanzas will be deleted.

Nothing wrong with more complex ideas, especially as they are all so clearly based around a single theme.

But all in all, I was a bit reluctant to post this, maybe I should have listened to my gut.

Why must everything been so minimal and barren for you Jim? Can't a poet take a few off roads if he is driving along the same theme. Full of ideas can be enlivening, whereas being minimalist, can be sterile and dull.

I have cut out some of the stanzas I originally felt where not essential.

No doubt smoking is a terrible idea to write a poem about but I was compelled too and it all came quite quickly, and then I done a number of edits that brought it all together.

I appreciate your comment Jim, but in some ways it disheatens me, i.e. you're saying - I prefer black and white to a bit of colour.

McGuire, I have often joked that if everyone in the world was like me it would be a pretty boring place. That's what I say because that's what I'm supposed to say. To be totally honest if all the world was like me at least I'd have stuff to read that I know I'd like. I have no idea why I go for the "minimal and barren" but that's what I like and I want the whole world to like it too. I do try to be objective but there are times, especially of late, when anything longer than a haiku makes me want to doze off. I shouldn't read when I'm tired but then I'm always some shade of tired so what's a guy to do?

The important thing is that you find your own voice. It may not be a voice that works for me and that would be a shame for me but that's no reason to trim off all the fat. The best thing is to get a variety of opinions and see what other people say. I will always want to distil away and distil away until we get to the crux of the matter. That's me. Don't be disheartened.

As for the subject of smoking, that doesn't bother me. I can't say it excites me but that's neither here nor there.

I think it's a good subject to write about...most subjects are really!

And what I like most McGuire is the defiant tone in the second comment (but then if Jim likes minimal and barren I just can't get enough defiance...always been that way...). You sound like you care about your writing SO much in that comment...and you should...if you don't no-one else will.

Now back to the barricades...
x

I think this would work really well as a perfomance piece.

The title's great too.
x

Good point Crafty Green Poet, upon re-reading this, it really does read, less like a poem and more like a sermon, you can see me standing on my podium lecturing in an arrogant fashion.

Not exactly what I inteded, but I was provoked to write this because my flat mate in Italty smokes constantly (I'm not averse to a cigarette myself) but the relentless fumes of his smoke really frustrated me, so rather than say anything, I wrote this, and that is probably why it sounds so lecturing.

This could well work as a performance piece, if I was smoking a cigarette while doing it, like a Shakespearen soliloquy with a cigarette, mock serious, comic...or, just pretentious?