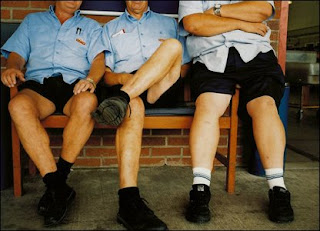 Colboy: 'Am no a spacecadet, a keep tellin yee, I'm a fully qualified Astronaut. And, a work like fuck in this place, we all day. A pull ma weight. So don't make oot am freeloadin or no breakin back in this joab.'

Terry: 'Aye, Son, lot a pish! just you get the heed doon, and stop fuckin' waffling.'

Colboy: 'It's the system, the organisation is fucked, we can't work within it, we canny cope, we just tolerate it, we shouldnay tolerate any of it, we are the system, and wir no that systematic, believe it or no. It has us tearing each other apart, when we should be dismantling the shite system.'

Terry: 'Ack! Yir all talk bumboy. Lot a pish! Just get on with yir work and shut it! You don't know your livin, Son.'

Joe: Is that terry and col havin a shouting match? HAHA! Terry, ya fuckin' inbred beast, shut the fuck up and get a wife! Stop being married tae the joab. Ya jobsworth Proddy.

Terry: 'Ha! You shut it, Joesy! Ya catholic cock. You catholics, all shaggin wee boys!'

Terry: 'Right, shut it, every body get the fucken heeds doon and do some work. Ya shower o reprobates.'
Posted by McGuire at 3:47 am

And people think my 'Aggie and Shuggies' are rough. The multiple voices are a bit confusing – it needs a second run through – but the banter is spot on. As a slice of life it's perfect but I don't really see any story, even a thin one. I think they need to be doing more than slagging each other off.

The voices do get a bit confusing, there are only three speakers, Terry, Colin and Joe.

This is not fiction. This is based on an 'actual' conversation that took place when I worked in the postoffice. This is no exaggeration.

That place was mean and full of vitriol like this. It would make a whore blush and rush to put her pants on.

There is no story. Just tough men being nonsensical to each other out of rage.

O, and most importantly, there was absolutely no team work in that place, that is why I left. Most of the people there were decent but to bitter, too 'masculine' dare I say, for Team Work.

They tore each other to shreds. Daily. Hourly. Minute by minute.